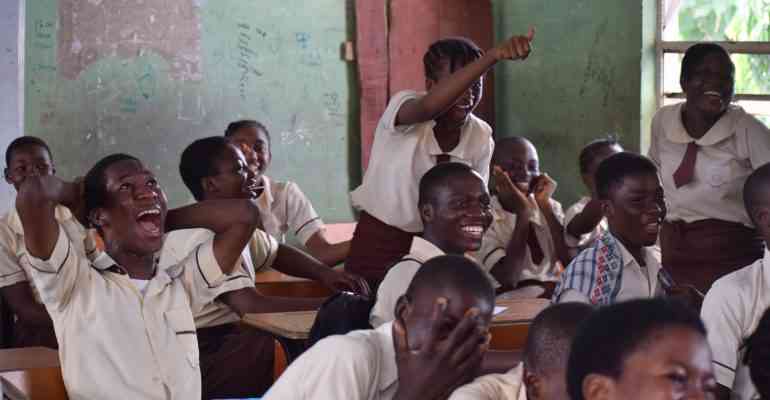 It was a feeling of overwhelming happiness and joyful excitement for the SS3 students of the Falomo Senior Secondary, Ikoyi-Lagos, Nigeria during a symposium jointly organized by Welti Foundation and The Yes, We Are Winning Foundation to commemorate International Women’s Day 2019.

The theme for this year’s Commemoration event is Sexual Abuse, The Role of the Male Folks, with a hashtag Balance for better (#balanceforbetter). Our guest, Miss. Adebara Adekunbi (Founder, Piece of My Heart Foundation), spoke extensively on the definition of Sexual Assault, Sex, rape and gender equality. She emphaized on the need for the male folk to be disciplined and avoid taking advantage of their female counterpart.

She lamented how terribly our society has been badly affected by the rising Sexual molestation and assaults that occur on a daily basis, especially among young adolescents. She further advised that your “YES” or “NO” must be balanced with your physical action. As a lady, you shouldn’t be saying NO to Sexual approach or harassment and still let your guards down, as this may be seen as affirmative for the opposite sex.

Furthermore, she said that even though some ladies may dress indecently, yet this doesn’t justify that such a person should be forced to have sex (rape). She also mentioned that an average of 2 among every 10 boys have also experienced molestation, which means both genders are capable of being a victim.

Finally, she encouraged the students to speak out and seek for help in case of any sexual molestation or abuse. She warned that perpetrators must not be left unpunished. She also reminded the students that often times, those who perpetrate such evil actions are those so close to us. Therefore, she challenged everyone to be vigilant and learn self-defense at all times.

The theme for the 2019 International Women’s Day also emphasizes gender equality. Women are challenged to rise up to leadership positions in every sector just as their male counterparts. The day advocates for a society where both men and women can compete favorably in career, science, and leadership positions.

The Executive Director of  Women Economic And Leadership Transformation Initiative (Welti foundation), Ifeoma Okonji,  emphasize the need to continue to speak against sexual abuse, and the need for the male counterpart to protect the girls and women, thereby balancing for better.

On behalf of all of us, we wish all women a happy International Women’s Day.