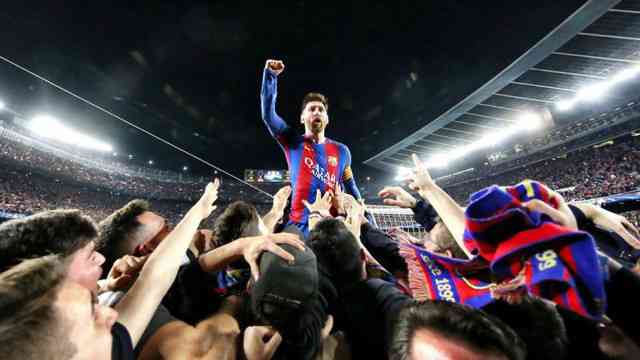 From the mouth of babes and sucklings echoes the name, “Messi!!!” The frail and fragile grandmas and grandpas, the youthful and the old, all shout “Messi!”, and thousands of fans sing his praise uncontrollably. “Messi is football and football is Messi. The atmosphere was electric and the 99,000 capacity stadium was almost filled to capacity.

It was an evening of beautiful football with Barcelona playing at home against Huesda football club. Not only that the Huesda FC was a lesser opposition but the knowledge that Lionel Messi would be on the pitch was enough motivation. For fans and football enthusiasts, paying over €100 for the ticket, and traveling a long distance to the Camp Nou would definitely not be an issue.

“Messi is god, as a person and even more as a player.” I didn’t appreciate this statement made by Samuel Eto’o until I watched the devotion and love for Messi being displayed by fans and spectators on the field over and over again.

Carlos Tevez was quoted saying, “Messi, he is from another planet.” True to Carlos Tevez’s statement, Messi is the main point of reference and the key man in the whole Barça team. This was evident in all the acholades and ovations that is bestowed on Messi in and out of the pitch both by fans, members of his team and coaches.

The 31 years old Argentina- born Lionel Andrés Messi Cuccittini is no doubt one of the world’s best player of the round-leather game. He remains a legend and a true definition of a football idol! He is undoubtedly a football star! For more on Lionel Messy click: https://en.m.wikipedia.org/wiki/Lionel_Messi

As I made my way to the Camp Nou, located at the outskirts of the city of Barcelona, I was full of expectations as I had eagerly looked forward to seeing the match. At some point I was confused about the direction to Collblanc, which is supposed to be my final metro stop.

While I stood to wonder which way I should go, I saw a large crowd of football enthusiasts wearing the Barca jerseys and moving towards same direction. I immediate joined them and followed confidently knowing that I was in the right direction . On arrival at the Collblanc subway station, I didn’t need anyone to direct me. I just joined the company of Jersy-wearing football enthusiasts to the stadium.  It was only a 5 minutes walk from the train station.

The loudest applauds in the stadium was when Messi was with the ball and the loudest pity was when he was fouled! You could feel the passion and love for him. He’s adored, greatly cherished. The devotion to him is amazing, nothing short of a god! You would see the spectators at the side of the corner stood up to hail him as he walked to take a corner kick. For more of Messi’s Praise click: https://en.m.wikiquote.org/wiki/Lionel_Messi

The rousing ovation is ecstatic! The adoration is celestial. And as I watch on I began to wonder if many of these people would adorn God in this manner. The jerseys won by many fans were those of Messi! He’s the idol of Barcelona. I’m very sure he will be immortalized as the greatest player baca has ever had.

In 2012, Javier Mascherano said of Messi, “ Although he may not be human, it’s good that Messi still thinks he is.” In spite of being adorned as the best player in the world, Messi does not take this glory to himself. For this, I’m glad! This is evident in how he offers thanks to the God of heaven whenever he scores.

This should serve as a lesson to the teaming fans and spectators that Messi is only a gifted tool in the hand of God to entertain humanity with the game of football. This ought to be the attitude of every gifted persons.

We all belong to God and he has endowed each of us with specific and unique talents that should be used for our profits, and edification of others, and ultimately to the glory of our creator. We have been given diverse gifts and divine abilities. Therefore, we should make every efforts to use them rightly and in such a way that God will be pleased with us, and we will be a blessing to humanity.

What is in your hand? Use it; stretch yourself beyond your limit, because there’s a potential in you. You’re winning! Yes, we are winning!

You may also read: WHEN TALENTS WINS DIVINE APPLAUSE