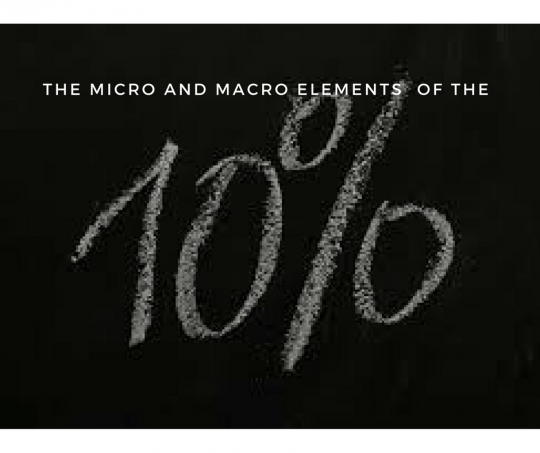 THE MICRO AND MACRO ELEMENTS OF THE TEN PERCENT

Some religious leaders and followers are better named as: “Hopeless”, “Frauds”, or “Silly.” And to make matter worst, many of them either don’t realize how silly they are or they are blinded by religious fanaticism or self deceit. Trust me, I do not mean to be harsh or judgmental in anyway.

Some of these religious leaders reminds me of the Pharisees and religious scholars of the Bible days who reckoned themselves as the custodian of knowledge, and pride themselves as personal assistants of the most High God. This false knowledge and self aggravation leads to pomposity and disrespect of other people’s opinions. Thus, creating a spasm and class between the leaders and their followers.

This phenomenon often results into giving undue or over-zealous reverence to such leaders, to the extent that their words, and instructions becomes more important than God’s oracle. This is unfortunate to say the least, as the honors due God is then bestowed on mortal man. For instance, rather than follow God’s instructions, what you hear is, “Papa or Daddy” said. To the extent that people cringe at the mention of such names.

I do not promote disrespect of men of God, as this would be disregarding God’s instruction to treat with respect those who truly represent God. However, this does not mean one would adore and adorn them with the glories and accolades that belongs to God. Sadly, many followers know and honor the words of their spiritual leaders even more than knowing God and honoring his words.

With reference to this, I will like to delve into the issue of offering and Tithes. The issue of whether tithing, that is, ten percent of ones income, is necessary or not is not a new phenomenon. One valid reference is seen in the New Testament when Jesus had a confrontation with the Pharisees and the teachers of the Law. Knowing their believes and disposition about tithing, Jesus challenged them to stop being hypocritical about the act.

In rebuking them on why they neglect the weightier part of God’s command, he said, “You’re hopeless, you religion scholars and Pharisees! Frauds! You keep meticulous account books, tithing on every nickel and dime you get, but on the meat of God’s Law, things like fairness and compassion and commitment—the absolute basics!—you carelessly take it or leave it.” Matthew 23:23.

He however commended their being meticulous about book-keeping, nitpicking over commas and semicolons, like practically carrying the scriptures on their forehead and body to show everyone how religious they are. In addition, they brag over the payment of tithes and offerings, and endeavor to keep proper records of their tithes, so as to win man’s approval. Yet, they neglect the basic requirements of the law, things like fairness and compassion and commitment, which he described as the absolute basics!

The religious leaders and their followers were rebuked for placing more importance on the minor requirements of the law while neglecting the major elements of love. Thus, they minor on major and major on minor. This is not acceptable to God who wants us to take care of the needy and show compassion, and demonstrate loving kindness, which is the heartbeat of God.

Let me mention that issues about how men of God enrich themselves with wealth by their church members who are committed to tithing, as well as the debates on whether members should pay the ten percents or not will never cease to generate controversies among people. I think a deeper understanding of the issues of church finance vis-a-vis tithes, offerings and donations and God’s directives would help stand in the position of being devoid of sentiments.

For those who have never been interested in paying of tithe, this perception will be justifiable. Some make reference to this passage and say that Christ downplayed the act of tithing by his statement. No, this is untrue! He taught that the sacrifice of love and compassion is more rewarding than the fat offering given in church. God will be more pleased with showing kindness to the poor and the needy than keeping good record of tithing.

Jesus however did not condemn the ten percent, he only frowned at doing one and avoiding the other. Just as the micro and micro elements are vital in the human body, even though one is needed in smaller quantities and the other in large quantities, the ten percent, and showing of mercy are both important but the latter is the major, and should not be compromised.

In summary, any sacrifice not borne out of love is unacceptable to God, and He alone sees the intent of the heart of man. He doesn’t need our money or gifts, he only accepts a heart of reverence and a life that is first sold out to Him.

Finally, religious leaders should ensure they major on showing of mercy, compassion and love over acquisition of wealth and “turning stones (people) to bread” for their own personal advantage. Also, hose who give should give generously, and not by compulsion. Likewise, those who receive should use it judiciously to the glory of God.

Like I said in my article, MR. SOLO AND THE BLANK CHEQUE, let us fear the Lord’s displeasure, hope in his mercy, and walk in his commandments.