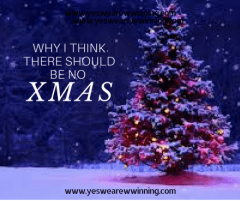 “WHY I THINK THERE SHOULD BE NO XMAS!”

There’s a long and sacred history of the use of “X” to symbolize the name of Christ, which is the reason Christmas is written as “XMAS”. Although, this may not be intended to disrespect the person of Christ, yet, I do have my reservations. I think It doesn’t give a proper representation of the word “Christ” IN CHRISTMAS.

The use of abbreviations has become so popular especially with the advancement of the new media. We live in a jet age; everything is done in a rush; we hardly have any time to waste even in writing.

The fact is if you don’t learn about words and abbreviations you might miss out on certain information. Common examples include “sup”, meaning ‘what’s up?  “Lol”, laughing out loud. “Brb”, be right back, “Asap”, as soon as possible to mention a few.

More recently, in the Christian parlance, abbreviation of some important words have become widely acceptable. Such words like: ” IJN”, which means “In Jesus Name”, “GBU”, to mean “God bless you”, and so on.

By the way, this article may be one of a controversial piece, but I intend to generate thoughts that would further enlighten my curiosity about the symbol used for Christ. This article is not a complete piece, as I seek to continue to research on the verity and acceptability of the abbreviation used for Christ in Christmas.

The Greek letter Chi or X in English is often used to abbreviate the name Christ, as in Christmas (i.e Xmas). When fused within a single typespace with the Greek letter Rho, it is called the labarum which was a military standard (vexillum) that was first used by the Roman emperor Constantine the Great. The idea was to superimpose the first two letters of the word Christ or Χριστός, in Greek.

Chi (χ) and Rho (ρ) (☧) consisted of a flag suspended from the crossbar of a cross, it was ideally suited to symbolize the crucifixion of Christ, and used to represent the person of Jesus Christ. Later on a wreath was added to symbolize Christ’s victory over death. Thus, if ☧(with a wreath around it) is a symbol adopted for Christ crucifixion, does it literally represent the name “Christ”? Search me!

X (named ex /ɛks/, plural exes[1]) is the 24th and antepenultimate letter in the modern English alphabet. The “X” comes from the Greek letter Chi, which is the first letter of the Greek word Χριστός, which in English is “Christ“.

My worry is, If the symbol ☧ is only the first two letters of the word “Christ” (that is, CH or Χρ ), then I don’t see how that is a complete representation of Christ in “Christmas”. And if the superimposition is thought to be true, was Christ crucified on an X-shaped cross?  And so, why did the early traditions adopt the Chi-Rho as an abbreviation for Christ?

Since Chi is X, then I think Christmas should be written as Chi-mass, or X-mas (named ex /ɛks/mas). I am not schooled in Greek, but I don’t think the word “Christ” is ideally represented by the use of just X (or Chi-Rho) as a replacement. Chi-Rho might as well represent other things.

Inquisitively, the Christian cross, seen as a representation of the instrument of the crucifixion of Jesus, is the best-known symbol of Christianity. The basic forms of the cross are the Latin cross (✝) and the Greek cross (✚), with numerous variants used in text, visual art, heraldry, and in various confessional contexts.

Again, why was X considered the symbol of the cross of Christ, and not ✚ or ✝? Oh, because that’s what is found in the Alphabets, and means cross? Arguably, there are various shapes of the cross used for capital punishment in those days. The truth is whichever shape of the cross Jesus was crucified on has nothing to do with the verity and sufficiency of His sacrifice.

Having said that, I do know from the history of Christian tradition that Apostle Peter was crucified upside down at his own request, since he saw himself unworthy to be crucified in the same way as Jesus. That makes the shape of his cross and inverted one.

Who was crucified on an X-cross? Early texts, such as the Acts of Andrew known to Gregory of Tours, describe Andrew as bound, not nailed, to a Latin cross of the kind on which Jesus is said to have been crucified (that is ✝); yet a tradition developed that Andrew had been crucified on a cross of the form called crux decussata (X-shaped cross, or “saltire”).

From this school of thought, one could conclude that it was Andrew, not Jesus that was crucified on an X-shaped cross. Then, why is the X used as a representation of the cross of Christ? Even though X could mean “cross”, as well as represent the first letter of the word Christ in Greek. However, does this abbreviation truly represent Christ.

For instance, my name is GreatMark. But does GR fully represent me? Besides, GR might mean several things. I’m still wondering! Therefore, X may have been an acceptable representation of the word “Christ” for hundreds of years. But, I don’t seem to agree with the use of this as an ideal representation of “Christ” in Christmas.

I recall that the same letter, Chi (X) can be calculated in the Four-figure table as χ² (X-squared) which is used to compare the distribution of a categorical variable in a sample to another sample. So, does this also means Christ-squared? And also, the symbol Rho (ρ)is used in the physical sciences to represent: Densities: mass density, air density or charge density (ρ) Resistivity (ρ) Rho meson (ρ+, ρ−, ρ0).

Therefore, the same Greek alphabets which is considered as the first two letters of Christ can also be used to represent chi-squared and density, even though the two letters are super-imposed to mean the crucifixion of Christ (that is☧), why not superimpose the Rho (ρ) on ✚, which is the true symbol of the cross of Christ?

As a student of English, I am mesmerized by the pliability of “X.” alphabet. The same letter that is used to represent the sacred name of Christ in Xmas is also used in other parlance as, the profane (in “rated X”), as well as the unknown (“X-ray“, or to find the unknown in a mathematical equation). Likewise, in Biology, X is used to represent Chromosomes, called the X-chromosomes.

In my opinion, I do not see any correlation between Xmas and Christmas. The alphabet “X” doesn’t represent “Christ” in the true sense of the word. Therefore, “X” cannot mean the same as “Christ” in the word Christmas!

Whether it dishonors Christ or not, I would rather write Christmas, and not as Xmas, not even for the purpose of abbreviations. I see the true essence of Christmas when the “Christ” is conspicuously written. Therefore, I would say, there’s no Xmas! It is Christmas, a celebration of the birth of the savior of the world –Jesus Christ!

Christmas symbolizes victory of death. Christ is the reason for the season. You are winning! Yes, we are winning!