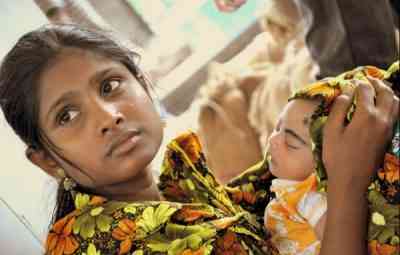 “THE ESCAPE OF HALIMA: AN ADVENTURE TO SELF-ACTUALIZATION”

It was broad day light but to me it was night. My day was about to be turned to darkness. Everything would change within the twinkle of an eye. My dreams are shattering little by little… My name is Halima, I am the second of 8 children of my parents. And this is my story,  a journey to self-actualization.

I had dreams of becoming an engineer. I had hoped to break out of the mold, and be a woman who would not be tied down by circumstances or become a liability. But my hopes were cut short by my dad. My wedding day has been fixed for middle of the year without my knowledge. I was just rounding up with my junior secondary school examination when my life turned upside down.

I got married to a man whose name I won’t disclose. He promised my brother scholarship and a business venture after school. My father got a brand new pickup van, which helped boost his agro-business. My family’s status changed in the twinkle of an eye. At 13 I was married!!

Let me spare you the gruesome details of my experience. But it is noteworthy that I suffered physically, mentally and emotionally. I had a child at age 15. She was beautiful. He married me because he wanted a female child. No one ever longed for a female child. What a contrast you would say!

But medical jettisoned because our culture permitted. It was the survival of the fittest; it was either I stayed alive and the child dies or I die and my child lives. The doctors saved mine instead of the baby. I cried for days and nights but the pain didn’t go away. I was only permitted to bear the pains for a while before I was forced to carry another pregnancy at the age of 17.

When Awa started showing signs of maturity at age 10, my husband would say weird things like,  ‘in three years time; your dowry would be paid just like I did for your mother.’ I thought it was a joke, until I began to notice different men come in with gifts. She was just 12. I knew I couldn’t allow my child go through same fate as mine. I needed to act fast to prevent a re-ocurrence.

I woke one morning and my husband had travelled for business in a different state. He usually stayed away for 2 weeks before returning home. On this day, the first wife had gone to visit her sick mum. The second wife went to the market to ply her trade.

This was my clear chance of escape, I had thought. I packed all the monies and valuable jewelries I could lay my hands on.. And I ran as far as my legs could carry. I mean that both figurative and literally. I took the next available bus to the West. I had an aunty who had lived in the West since after her National Youth Service program. She had lived and worked there, and has been married for 20 years.

At 28, I and my child became class mates. I was attending an adult education program when she was preparing to write her high school exams.  I was confident that my dreams would be fulfilled no matter what. I started a small business with the money I stole, rented an apartment and enrolled my self and Awa in a public school.

The escape of HALIMA from a life she was forced to live was a journey to self-actualization. Your attitude in life determines your altitude. According to Kahil Gibran, your living is determined not so much by what life brings to you as by the attitude you bring to life; not so much by what happens to you as by the way your mind looks at what happens. Attitude is a little thing that makes a big difference.It is not the challenges that destroys a man but the attitude in the midst of such challenges.

The excuse that your environment has plunged you into this unfortunate situation, and that there’s no way out is not tenable and a lie! You can change your situation by self determination and ultimately by your absolute faith in God who has made you for his good pleasure. You are not created a mediocre and as such don’t stay down!

Where’s Halima? HALIMA ran away from slavery into a life of freedom where she can pursue her dream. You might need to leave your environment for you to make appreciable progress in life. Or perhaps what you need is a change of mentality and attitude. You need to stop lying to yourself about your situation. You can still achieve your aspirations even at this age .

You can break out of he mold; you can fulfill your dreams. You can win! You are winning! Yes, we are winning!