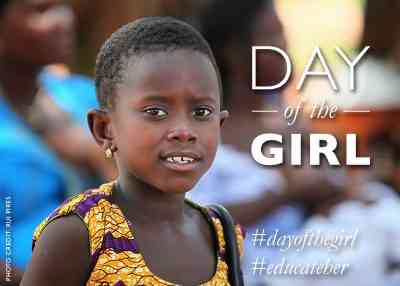 “THE DAY MY LIFE WAS DEFINED”: THE AMAZING STORY OF A 15 YEAR OLD GIRL

Life was everything I could ask for; a rich father, two loving sisters and my beautiful and caring mother. We never lacked a thing; life was a bed of roses, so to speak. I didn’t have to sweat or whine over anything. I’d though my life was defined by this until much later. I never even thought I would be writing this Kina story at all. I had always thought everything was going to go smoothly and if at all I was going to share any story it was going to be like the Cinderella’s story.

Every adolescents always had a maximum of five days monthly menstruation, but mine was different. When it got very worrisome, I was flown abroad for medical checkup and was diagnosed with menorrhagia. I usually have my menstrual period a maximum of six times in a year (that is every other  month). Although, I was cool with it because I didn’t like the pain that accompanied the monthly flow anyway.

On this faithful day it was time to be on my period, but unlike my previous experiences, this particular flow didn’t stop  after seven days. I had thought it was because of my plenty sugar intake because I attended two of my friends birthday party and I had lots of cakes and sweets. This flow continued for weeks and then one month, and then the second month.

I began to look pale even though I managed to keep my parents and friends from knowing what i was going through. When i couldn’t bear it alone, I had to open up to my mum who took me to the family hospital. To my amazement, I couldn’t get a treatment that would immediately stop the flow as I had expected. All I got was plenty prescription drugs.

So, I started using drugs to start and stop my monthly flow, and whenever it came I was always stained or smelling, It was really bad, trust me! I had to stop going to school. My parent got private teachers who came home regularly to teach me and prepared me for my entrance examinations. I was only15 years old, and I could imagine my life and dreams fading away little by little.

What could I have done wrong, I’d thought crying with no consolations. Oh… I forgot to add that sometimes the drug won’t work and I would be on for a whole month or more. I was shattered. My family tried so much to make me feel loved and happy but it wasn’t what I needed. I had this vacuum that needed filling. I was like the biblical woman with the issue of blood. I thought mine would never have an end. I became hopeless to say the least.

As I was trying to adjust to the changes in my life; guess what, my dad passed away. I can’t even start narrating that story because it still feels like a dream. He was happy and well one minute and the next he was gone. I felt alone; I could predict the next possible action but it was looking like it was going to take forever for it to happen. Anyways, it finally happened.

A month after my dad’s burial; his family came and drove us out of the house and took over his possessions. Guest what, they said my dad had no male child, as such my mum and I are not entitled to inherit his possessions. My uncles were the favorites, and so my Dad’s properties became a family house for his siblings. My mum was still in shock of his death when all these was happenings, so you can imagine her frustrations.

I cried for days, but what was the use of the tears. He was dead and buried already. We moved back to my mum’s family house somewhere in the western part of the country. All was going well; we had to change to public school, our meal became 001 or 100 or 010. We settled in fine thinking the bad days are over, little did I know that more was on the way. Two years later my mum died.

At this time Ella was in 200 level; I just finished my high school and Ceci was just in her second year..Okay so Ella and Ceci are the two loving sisters I talked about in the beginning. Ella adjusted quickly to these changes but it took Ceci a much longer time to adjust to the environment. She couldn’t get hold of the fact that she wasn’t part of the high and mighty anymore and there was no dad to shower her with attention. It was pretty difficult for her so she started seeking for attention from people no matter whom they are; male or female, old or young.

So, after mummy’s burial we were all alone in this world. Again, I expected mummy’s death. Don’t ask me how or why? It was logical. We needed to survive. Ella and I picked up a side job so we could stay alive. Though it wasn’t helping much we could survive on it. We threaded on, we lived on in spite of the hardship.

I got an admission into the university. Ella was in her final year already. As I was thinking that everything was coming back into place, another thing occurred. Ella was raped by her boss at work. This worsened everything. The only thing that was restraining Ella from prostitution was the oath we swore to our dad; to keep our virginity for our husbands. But now it was gone. It was the dawn of a new day for her… everything was gone! She swore to make guys pay for her boss’s mistake. I didn’t know how to prevent her not to.

10 years after my continual blood flow started, it was as if as the years went by the case worsened, drugs stopped working long time ago. My years in school was a living hell. The school identified me and defined me by my situation. It was worse than being a thief or a cultist. My gist spread abroad the whole campus. At the beginning it was terrible but now in my final year I wasn’t bothered anymore, I had so much joy and peace. I was going to graduate with a second class upper.

This was how it happened. It was a cold Friday morning and I had an 8 a.m lectures. After the class ended I was on my way back home (I didn’t leave on campus because of my ailment and financial reasons) when it started raining heavily. I had an umbrella but it was of no use. The rain was terrible. I ran into a building to keep myself warm until it would stopped raining.

I was already dripping blood as usual. As I looked up to my surrounding still lost in thought I realized that everyone’s attention was on me. Unknowing to me, I took shelter in a church or a fellowship building. I felt so much anger and pain and shame on the inside of me. I was angry at God for allowing so much evil to happen to me and my family. What could we have done to deserve all these sufferings, I;d thought.

I tried to leave but it was as if an invisible chain held me captive on same spot. Suddenly, the thought go my childhood flashed back. I used to go to church because I was forced to. Dad was a religious man, and he wouldn’t allow any one stay back at home on Sundays. But this time it was different. The look on the faces of my spectators wasn’t that of compulsion. I saw happiness and bold smiles as if they were collecting gift or it was party.

I was spurred back to reality with these words “Your situation or circumstances doesn’t define you, neither does fame; wealth; poverty or other earthly possessions. Christ defines you; Christ is your hope of  glory!!!” It felt like these words were spoken by God Himself; it was loud and clear. It revived me. I knew I was in for a change!

I finally met the preacher an he explained to me in details. I left the building with some hope and felt the joy I never had felt in my life. The issues of my issues of blood wasn’t in anyway important to me like the ecstasy of being assured that my life is only defined by my relationship with God and not my problems.

I got back to my room, freshened up, and went straight to bed, anticipating an amazing restful night. It was only the next morning I observed that I was dry; the flow had stopped! I didn’t believe it at first, I thought I was dreaming. My dear friend, that was how i was delivered from a 10-year constant menstrual flow. And more than that God gave my life a new meaning, and made me a glory among those who had rejected me.

My friend, your story too can change. You can find your life meaning and purpose through a flourishing relationship with God.  You are well defined by Christ. You must know that “Everyone gets knows down but you must define yourself by the day you get up.”  Like, me you can say, “I am winning”! You are winning! Yes, we are winning!