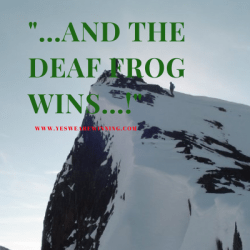 Once upon a time there was a bunch of tiny frogs who arranged a running competition. The goal was to reach the top of a very high tower. A big crowd had gathered around the tower to see the race and cheer on the contestants. Honestly, no one in crowd really believed that the tiny frogs would reach the top of the tower, left alone see anyone of them win the race.

The crowd yelled statements such as: “Oh, WAY too difficult!!!” “They will NEVER make it to the top!” “Not a chance that they will succeed. The tower is too high!”, and so on.

At the end of the race everyone else had given up climbing the tower except for the one tiny frog who, after a big effort, was the only one who reached the top! Then all of the other tiny frogs naturally wanted to know how this one frog managed to do it?

A contestant asked the tiny frog how he had found the strength to succeed and reach the goal? To his amazement, It turned out that the winner was DEAF!!!  Yes, it was deaf to all the discouraging comments of the crowd. The frog was insensitive to the pessimists who were out to frustrate its dream of reaching to the top of the tower.

Whether you like it or not, people will attempt to dissuade you from reaching your goal, whether intentionally or unintentionally. You must know that the word is potent to build and destroy. Everything you hear and read will affect your actions somehow. Therefore,  you need to be determined and always exude an optimistic demeanor in the race of life.

Never listen to other people’s tendencies to be negative or pessimistic because they take your most wonderful dreams and wishes away from you — the ones you have in your heart! As you run the race of life, be positive about life, even if it appears to be seemingly difficult. Your life will follow your thoughts!

Some people have remained permanently incapacitated by the words of discouragement that people speak. And to others, it has become difficult to break out of limiting thoughts of their environment. However, God offers total healing to such minds that have been corrupted by afflicting and stagnating thoughts. Modern medicine can heal bodily afflictions but can definitely not heal the mind. It is only God that can heal the mind!

In talking about the power of our thoughts, T.D Jake wrote, “Your thoughts are often the product of damaged emotions, traumatic events, and vicious opinions forced upon you by the bodacious personalities of domineering people who continually feel it necessary to express their opinions about you.

He further said,  that many people are plagued all their lives by memories of failed marriages, broken promises, and personal calamities… these negative impressions, armed with memories and flashback “movies”, strengthen themselves by rehearsing past failures and wounds over and over again. It is somehow like bad television reruns- we don’t even enjoy watching them yet we find ourselves transfixed to the screen…

In the same sense, you must remind yourself that you don’t have to watch the “movie” in your mind if you are not enjoying what is being played. That’s right-hit the remote control. You do have control over your thoughts. The bible teaches us that if we are going to be healed in our own mind, then we must occasionally reprogram ourselves to “think on better thoughts.”

In order to be guarded by positive thoughts, he counseled, “You must choose what you are going to meditate upon. Choose carefully, though, for you will ultimately become whatever you meditate upon. The enemy knows this, so when he wants to destroy your morality, he doesn’t start with an act; he starts with a thought. A thought is a seed that, if not aborted, will produce offspring somewhere in your life.”

Some persons may have told you that you will never amount to anything in life. Unfortunately,  over time you have inculcated these thoughts and have allowed it to form your attitude such that when you are faced with difficulties you quickly affirm the thoughts that you would never succeed.

Thoughts are powerful and if not well fashioned it can destroy ones destiny. Gladly, the scriptures offers a solution out of captivating thoughts. It says, “For the weapons of our warfare are not carnal, but mighty through God to the pulling down of strong holds; Casting down imaginations, and every high thing that exalteth itself against the knowledge of God, and bringing into captivity every thought to the obedience of Christ.” 2 Cor 10:4-5.

Don’t be tied down by your hurtful past. Get rid of the thoughts that limits you, and move forward to greater things. If it has been difficult for you to forgive your past, then you need to allow God to heal your mind and open new doors of opportunities  and breakthroughs. You need a relationship with God your maker. Pray for a renewed mind, pray now!

“Whatever things are good and of good reports, think on these things…Yes you’re winning! Yes, we are winning!

“Hopes for Every Moment”, by T.D.Jakes

Imitation of Christ by Thomas A. Kempis.