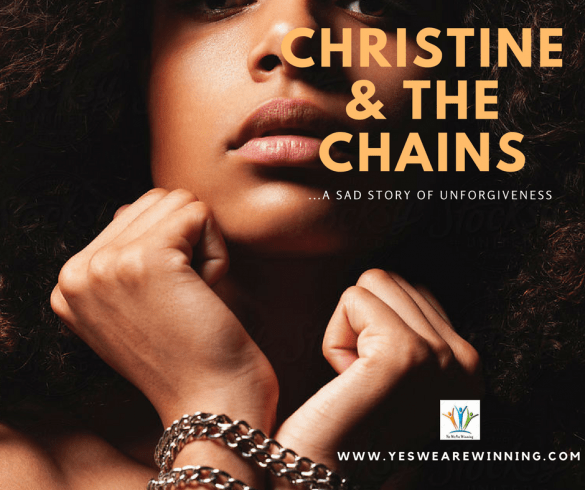 CHRISTINE AND THE CHAINS: A SAD STORY OF UNFORGIVENESS

It is amazing how unforgiveness can steal a person’s health, happiness and peace. Whenever Christine heard someone talk about forgiveness, she just always zoned out just so that she won’t be persuaded to forgive her father.

Guess you are wondering if he ever violated, molested or victimized her? He did none of these; she just hated him and was determined never to forgive him. She always feels like if he did one of these she might have forgiven him long ago and moved on in life. To her, he did way more than these.

She hated him not just because he married another woman long before she was born, but because he didn’t take care of her older siblings; her step siblings and extended family, such that the family welfare became a burden for her mother alone to bear.

The father was irresponsible; and led a shameful life. He became a drunk, a drug addict and a cheat. Christine was never proud of his father, and has she grew up, she hated her father for all of these and more.

For 16 years, Christine lived in unforgiveness for her father, she tried to love him but the secret tears and pains that her mother had to endure couldn’t let her. She couldn’t make friends easily; couldn’t trust people- especially her male friends. she lived in total misery, her social life was a mess too.

What did you expect? She had a default of frowning most of the time, she found smiling to be a very difficult thing to do. In all of these, she was appeared Pius in the public, acting like she’s really cool but deep down she wasn’t at all.

On August 4, 2010… Chrisitine was going to be stepping into a new milestone of her life and she knew so well that she didn’t want to continue the way she had started. She wanted to be like every other normal young teenagers in the university who were happy and always cheerful. She wanted to be able to trust and keep friends, have an awesome social life and if  possibly fit God in, but most importantly, she wanted out of her misery more than she wanted to breathe.

Days went by… September 2010, she found a solution. Though she had struggled for a while but she needed God to intervene somehow? So she surrendered her helpless self to Christ for a total regeneration. Yes… she became born again… what a joy!

But sadly, she still couldn’t break away from the shackles of unforgiveness. She thought she had let it go but somewhere she knew she had to consciously let it go. Becoming born again was just a step of her healing process.  She needed to make frantic efforts to let go of the hurts, and allow the God break her.

A new year is here. January 2011… she met a friend that was interested in her well-being, her spiritual growth, academics, social life, family and so on. It was easy for her to crush on this guy because he was everything her dad was not. But little did she know that he was the angel sent to her to help her heal and really let go of her painful past.

She forgave her father, got healed quickly and regain sound mind and health. Today, they are happily married with and blessed with four lovely kids.

Unforgiveness is a strong chain that holds you down and won’t allow you breakthrough in the place of prayer. It incapacitates and weighs you down so much that life gets unbearable. Imagine if Christine hadn’t made up her mind to forgive her dad and let go of her past, she wouldn’t have gotten that gift of her one true love and a happy family.

According to Worthington et al. (1999), unforgiveness can be defined psychologically as the emotional imbalance due to delayed response towards a transgressor. However, the expression (anger, hatred, frustration or violence) depends on the mental state of a person. Worthington and Scherer (2004) in the research study concluded that as unforgiveness is a type of stress response, it has a direct impact on the mental health and psychology of a person. The study also suggests that unforgiveness can be viewed as a state which a person is confined in a stressful state of mind. 1

Good news! You can break the chain by letting go of the chain of unforgiveness just like Christine did. Forgive yourself and forgive others who may have wronged you. They don’t always have to come and ask for forgiveness before you forgive freely. You don’t have to maintain your pride and integrity because they were the ones who wronged you.

You have to follow the standard of Christ. “Do not be conformed to this world…” (Romans 12:1-2). The greatest price and miracle Christ did on earth wasn’t healing the sick, raising the dead or supernatural provision; it was choosing to come and be slain for you and I to be forgiven and reconciled to the God. And if he forgave us freely when we didn’t merit it, how much more should you forgive those who willfully maltreat you.

If there is one thing Christine learnt in her life it is, “letting go is much easier than holding on”. If you can forgive today, you will sure enjoy peace and joy and health that can’t be humanly comprehended. You can’t do it in the energy of the flesh; you have to hand it over to God for him to carry out a spiritual “heart surgery” that would usher you into a new life.

“Unforgiveness is an extra burden let it go.”

THE DAY HATE KILLED A MAN!