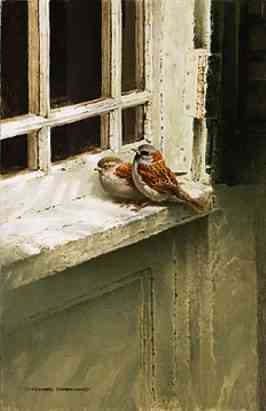 THE HELPLESS SPARROWS AND THE ALIEN CREATURE

One raw winter night, a religious skeptic who worked as a farmer, heard an irregular thumping sound against the kitchen storm door. He went to a window and watched the tiny, helpless shivering sparrows beat in vain against the glass. Touched by the drama, the farmer bundled up and trudged the fresh snow to open the barn door for the struggling birds.

He turned on the lights and tossed some hay in a corner. But the helpless sparrows, which had scattered in all directions when he emerged, from the house, hid in the darkness, afraid. The man tried various tactics to get them into the barn. He laid down a trail of saltine cracks crumbs to direct them.

Then he tried circling behind the birds to drive them toward the barn, nothing worked. Being a huge, alien creature, had terrified them; the birds couldn’t comprehend that he desired to help. The farmer withdrew to his house and watched the doomed sparrows through the window.

As he stared, a thought hit him, like a lightening from a clear blue sky. ‘If only I could become a bird –one of them –just for a moment. Then I wouldn’t frighten them. So I could show them the way to warmth and safety’.

Truly so, but a man becoming a bird is nothing compared to God becoming a man. The concept of a sovereign eternal being that created the universe, confirming to himself a human body was –and is –too much for some people to believe. Sadly so!

Just like the compassionate farmer, God had watched the fallen, helpless and wretched man struggled to be saved from satan who has subjected him to tyranny and oppression. Like the farmer too, God had sedulously attempted in so many ways to save man from his cruel adversary.

After the fall of man, God had sought to bring man into a cordial and practical relationship with him. In doing this, God chose various ways to reveal himself. But the final, complete self-expression culminated in his son -Jesus Christ. This, of course, is still difficult for some to comprehend.

Noah, one of Israel’s colourful Prophet found favour with God amid a crooked and perverse generation. He was told to build an ark of escape for those who cared to be saved from the impending flood. Many disbelieved him and declined his warning, except for Noah’s family and the animals. And just like the birds in the story were doomed, many were doomed in the flood that saw the end of the then world.

Despite man’s sin and rebellion, God’s unflinching effort to save man was unwavering: He sent Prophets to proclaim His love, and He showed His potency through signs and wonders. He did all these to draw man to himself. These Prophets never gave up. Yet nothing worked!

Could it be that, like the helpless sparrows, man couldn’t comprehend that God desired to save him? No doubt, man needs deliverance from his arch-enemy, satan. But, why does he constantly resist his creator, who can save him? It is ridiculous to have the clay struggle with the potter about what object is going to be made of it. Likewise, it is foolishness for the created to contend with the wisdom and sovereignty of the creator!

If only the farmer wish was fulfilled, the sparrows wouldn’t have been doomed. if he could become a bird, he would have showed them the way to warmth and safety. But unfortunately, the helpless sparrows were frightened by the farmer’s appearance, and as such mis-interpreted his actions, which was to help.

God could have sent a love note, may be drop it from heaven in an unprecedented manner that would marvel the world. What difference do you think that would make? Apparently, nothing different from what befell the earlier prophets who were murdered for carrying God’s message. This love note would have perhaps be torn and even burnt.

But thanks be unto God for His wisdom, Knowing that the only way He could get through to man was to come down Himself; become a man for a moment, and then show him the way to safety –freedom from sin and satan.

Jesus is all God wanted to say to the world. He is God’s word and the way to the Father who love us with an everlasting love (John 1:1; Jer. 31:3). “He sent his son last of all, saying they will respect my son,” But the tenant said to one another, ‘This is the heir, come let us kill him…so they took him and killed him” (Mark 12:7-8). Jesus was sent for the very purpose –to be killed as a ransom for our sins. He was sent to bear the consequence of our disobedience.

He became the propitiation for our sins on the cross so that we will be saved from God’s wrath. The blood he shed on the cross was for our cleansing and forgiveness (Eph. 1:3). He came to show us the way to the father. He says, “I am the way, the truth and the life, no one comes to the father but by me” (John 14:6).

Jesus is calling you to come to him now before he withdraws to his house like the farmer in the story. He never desires to watch you doomed!

Don’t be doomed like the helpless sparrows. Speak to him right now, say: Lord Jesus, I acknowledge you as my savior and Lord. I confess that I am a wretched sinner; I repent of my sins today. Save me and give me the grace to follow you to the end. In Jesus’ name. Amen.

IF FIVE SPARROWS ARE SOLD FOR TWO PENNIES, WHAT ARE YOU WORTH?