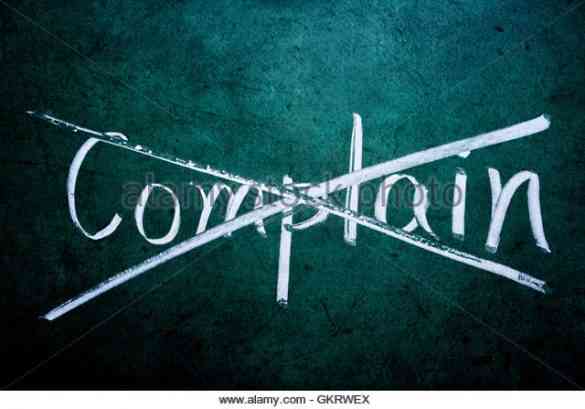 CHORUS OF COMPLAINT: AN EVER-TRENDING TRACK

What does it mean to complain?

According the Merriam-webster dictionary, to complain is to express grief, pain, or discontent. From the scientific perspectives, an average person is said to complain nearly 15-30 times a day! So, we all are guilty of complaining, but just that some of us are just not aware of it, while some are whiners for life!

Complaining is an innate characteristics of the human condition. And in every part of our society today, complaining has become a growing culture. In his book, ‘A Complaint Free World’, Will Bowen explains five reasons why people complain. This includes: to start a conversation or establish a camaraderie, To avoid taking action by shirking responsibility, to brag about their superiority, to control others, and to pre-excuse poor performance.

For whatever reason we have to complain, justifiable or not, there is always something positive we can do about the situation. Rather than whine, expend your energy on things that you can control or change. Though, complaining has a negative connotation, it also has a few benefits. It unites against a common enemy, thus, creating a social bond to fight against a common obstacle.

In the case of the Israelites, the miraculous exodus from Egypt was regretted when they were confronted with a severe wilderness experience. The hardship they met in the wilderness, the fear of what to eat, and the possibility of death, made them consider that the slavery and oppression in Egypt was a better option. Whereas, God’s intention was not only to emancipate them from the cruel lifestyle in Egypt, but also to establish them as a peculiar nation in fulfillment of his promises to Abraham. It is very sad that rather than show gratitude to their deliverer, they chose to hurl accusations at him and whine at every temporary discomfort. They chose to sing choruses of complaints.

The Biblical Israelites were constant complainers. Listen to their chorus of Complaints: “And they said to Moses, Is it because there are no graves in Egypt that you have taken us away to die in the wilderness? Why have you treated us this way and brought us out of Egypt? Did we not tell you in Egypt, Let us alone; let us serve the Egyptians? For it would have been better for us to serve the Egyptians than to die in the wilderness” (Exo 14:10-24).

Moses, a courageous leader, and a faithful servant of YAWEH, had experienced the power of God, and have encountered His presence. He told the people, “Fear not; stand still (firm, confident, undismayed) and see the salvation of the Lord which He will work for you today. For the Egyptians you have seen today you shall never see again. The Lord will fight for you, and you shall hold your peace and remain at rest.” I thought that was enough assurance from a man to whom God has revealed His purpose. But alas, the discontented Israelites, continued to whine, and even threatened to kill Moses for even risking his life to initiate their freedom.

Pressured by the people, Moses continued to cry out to God for help, but God rebuked him saying, “Why do you cry to Me? Tell the people of Israel to go forward! Lift up your rod and stretch out your hand over the sea and divide it, and the Israelites shall go on dry ground through the midst of the sea (Exodus 14:11‭-‬16 AMPC).  In essence, God meant, “Why you still complaining? Have I not told you I will fight for you? So since I’ve given you an assurance, the next step is to move forward, lay hold on the promise and face your fears. Perhaps, that is the same instruction you need. Courage is the fear that has said its prayers. Having prayed about it, just let your soul be at peace, and move forward in faith.

This event reminds me of the story of Maya Angelou, a famed American poet and author. From the age of three to seven she was raised by her grandmother, a period of calm and stability in what would be a very traumatic childhood. Grandma ran a general store and one thing that riled her was people complaining. They’d complain about the heat, the cold and a myriad of other issues Maya’s grandmother thought trivial.

Whenever that occurred Maya’s grandmother would wait till the complainer left the store, call Maya over to her and say,  “Sister, did you hear what Brother So-and-So or Sister Much-to-Do complained about? Sister, there are people who went to sleep all over the world last night, poor and rich and white and black, but they will never wake again. And those dead folks would give anything, anything at all for just five minutes of this weather that person was grumbling about. So you watch yourself about complaining, Sister. What you’re supposed to do when you don’t like a thing is change it. If you can’t change it, change the way you think about it. Don’t complain.”1

“Can God provide meat for His people?” (Psalm 78:20). Clouds look dull and melancholy, yet without them we could have no rain, and therefore no fruit. Thus, afflictions look black and unpleasant; but from clouds of affliction come showers that make the soul to yield the peaceable fruits of righteousness. Stop the chorus of complains; sing: ‘For God has triumphed gloriously…”( -Ex15:1). Create the change through Praise. Be optimistic, be the change! You’re winning! Yes, we are winning!