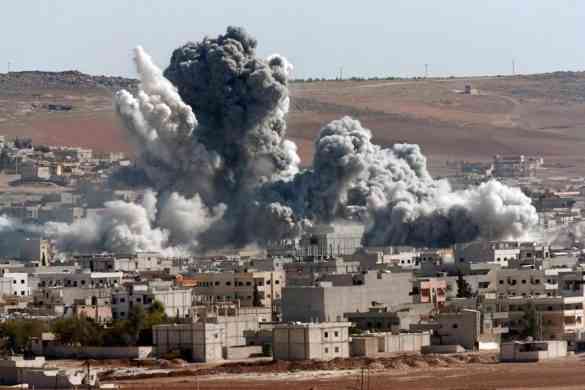 Hitherto, all efforts to end the civil war has failed. But see what this man did when he visited Syria

Syria is today notable for the civil war that is being perpetuated by the Bashar al-Assad led government and a group of rebels who wants him out of power. This war which has been on for more than six years have claimed the lives of more than half of a million citizens. Daily on our TV screen we see the monumental devastation of the ancient city. The conflict which began in 2011 in the city of Deraa, was a peaceful protest following the arrest and torture of 15 school children who wrote anti-government graffiti on the wall. What was meant to be a peaceful protest, calling for the release of the children, and for democracy, however turned sour as the government forces further launched attacks on innocent and defenseless civilians.

The opposition was fueled by those who wanted the president to step down, and this group was made up of several people including the rebel fighters, some political parties, and those living in exile. This was however complicated when Isis, (ISIL, IPA /ˈaɪsᵻl/),  an Islamic extremist group, which uses violence against anyone who doesn’t agree with their extreme views, joined the fight.
As a result of this war, millions of Syrians have become refugees in neighboring nations like Jordan, Lebanon, Turkey, Iraq, and in Europe. Many of those who remained in Syria have moved from the major cities under severe attacks, to the countryside.

As the civil war in Syria grinds on, several efforts by, the United Nations, and several international mediators have failed to put an end to this war that have ravaged the once peaceful country. Several recommendations have been issued, and several conflict resolution meetings held but none has yielded any lasting success. Of note is the Syrian peace process which has equally not been effective to end this war. The Syrian peace process is the ensemble of initiatives and plans to resolve the Syrian Civil War, which has ravaged in Syria since 2011 and has spilled beyond its borders. The peace process has been moderated by the Arab League, the UN Special Envoy on Syria, Russia, and Western Powers.[1] The negotiating parties to end the conflict are typically representatives of the Syrian Ba’athist government and Syrian Opposition, while the Western-backed Kurdish forces have stayed out of the negotiations framework. Radical Salafist forces and Islamic State of Iraq and the Levant have not engaged in any contacts on peaceful resolution to the conflict.

The attempts to find a solution to the conflict began in late 2011, when the Arab League launched two initiatives, but without much success. Russia in January 2012 and in November 2013 suggested talks in Moscow between the Syrian government and opposition. In March–May 2012, hopes were on a United Nations/Arab League plan coordinated by Kofi Annan. In January and February 2014, the Geneva II Conference on Syria took place, organized by Lakhdar Brahimi, then UN envoy to Syria. On 30 October 2015, further talks started in Vienna involving officials from the US, the EU, Russia, China and various regional actors such as Saudi Arabia, Egypt, Turkey and, for the first time, Iran. Peace talks with rebel leadership continued in Astana, Kazakhstan in 2017.[2] The Kazakh officials are offering Astana as a neutral venue and “a natural home” for peace negotiations on Syria.[3]

Just today, US launched Fifty-nine Tomahawk cruise missiles at Syria – The strike is coming after suspected chemical attack in Idlib province – Pentagon says Syria violated its obligations under the chemical weapons convention – About 86 people, including 27 children, were killed after a suspected poison gas attack on the rebel-held town of Khan Sheikhoun in Idlib province. In retaliation for a chemical weapons attack that killed scores of civilians, the United States has attacked Syria with dozens of cruise missile strikes at a government-controlled airbase.

As I studied the beautiful history of Syria, I began to be worried about what she will look like after this war. History has shown that many cities today were birth from the destruction of an ancient one, and such are some of the cities that have formed Syria today. My quest has spurred me to compare the status of Syria in ancient history to their current state which has been sharpen by war. More than 2000 years ago,  some spectacular events were recorded of Syria, which excites me, but at the same time, saddens me when compared with the current state of the country.  From Matthew’s accounts of Jesus’ exploits, he recorded that,  ”News about Him spread all over Syria, and people brought to Him all who were ill with various diseases, those suffering severe pain, the demon-possessed, those having seizures, and the paralyzed, and he healed them”. Matthew 4:24.

These miracles were done in Syia, formerly known as Assyria. Syria is a country located in the Middle East on the shore of Mediterranean Sea and bordered, from the north down to the west, by Turkey, Iraq, Jordan, Israel, and Lebanon. It is one of the oldest inhabited regions in the world with archaeological finds dating the first human habitation at c. 700,000 years ago. In Syria, like many other places Christ visited, he confirmed his Divine mission by miracles, which were emblems of the healing power of his doctrine, and the influences of the Spirit which accompanied it. I am very certain that this event brought great joy to Syria, which also means ‘Happy’. However, the current predicament in this country has brought sorrow and afflictions to many. This is sad indeed!

Furthermore, Jesus’s sermon on the Mount, was specifically on Mount Hermon which is located in Syria. Mt Hermon is a mountain cluster constituting the southern end of the Anti-Lebanon mountain range. Its summit straddles the border between Syria and Lebanon[1] and, at 2,814 m (9,232 ft) above sea level, is the highest point in Syria.[2] in his book on the Gospel of Matthew, R.T. France noted that Mount Hermon was a possible location of the Transfiguration of Jesus.[8][9]

Syria, which now has about 74% Muslim population, was the cradle of the prophets and apostles of old. History has it that the gospel spread from Antioch in Syria to the rest of the world. Syria was the cradle of civilizations and was pivotal to the exploits of the forefathers of Christianity.  God spoke on Mount Horeb, Hermon, and Golgotha, which are all part of Syria, and most of the prophecies were fulfilled. With a rich biblical history and divine privileges, what have become of Syria today is not only unfortunate but very demoralizing.

Antioch was also one of the earliest centers of Christianity; it was there that the followers of Christ were first called Christians, and the city was the headquarters of the missionary St. Paul about 47–55 ce (Acts 11:19-26). Antioch, now called Antakya, in Turkish, was a populous city of ancient Syria and now a major town of south-central Turkey. It lies near the mouth of the Orontes River, about 12 miles (19 km) northwest of the Syrian border.  In 1098 it was captured by the Crusaders, who made it the capital of one of their principalities, and in 1268 the city was taken by the Mamlūks, who razed it to the ground. Antioch never recovered from this last disaster, and it had declined to a small village when taken by the Ottoman Turks in 1517. It remained part of the Ottoman Empire until after World War I, when it was transferred to Syria under French mandate. France allowed the town and surrounding area to rejoin Turkey in 1939.

Will the war in Syria come to an end? Are the recent developments in Syria part of the end-time prophesy which would culminate in the end of the world (Isaiah 17:1)? There is no doubt that the world will soon pass away in fulfilment of God’s word and plan. Therefore,  “Since everything will be dissolved in this way, what kind of people ought you to be? You ought to conduct yourselves in holiness and godliness” (2 Peter 3:11). You’re winning! Yes, we are winning!