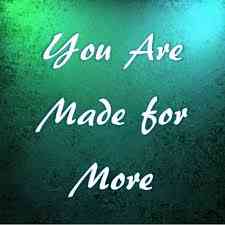 YOU’RE MADE FOR MORE!

He was born in pains; and named sorrow-maker. The circumstances of his birth was the reason for his misfortune. Until he cried out, he was a child at risk but he never accepted things that are less than God’s best! Rather than remain in the unfortunate mold, he prayed to the barrier breaker. Until he prayed, he was a sorrow-maker, and unfortunate

man. He was seen as an outcast, a good-for-nothing mediocre. It was written of him, “Jabez cried to the God of Israel, saying, Oh, that You would bless me and enlarge my territory! Please be with me in all that I do, and keep me from all trouble and pain!” And God granted him his request.” (1Chronicles 4:10). Mediocrity is the road to nowhere. Like Jabez, you too can exit mediocrity, and pursue excellence.

What unfortunate mold has your family or society put you, such that you consider justifiable? Have you adapted to the situation in your environment because you think it can only get worst?  You may think you have genuine reasons to settle where you are, or remain in the mold that the situation around you have created. There’s a potential in you that would cause new doors to be opened. Your life will follow your thoughts. Therefore, like Jabez, be determined to break out of the unfortunate mold of stagnation and mediocrity. Cry to God, your maker. He is the comforter, the name that fits so perfectly. He is the way maker, the life changer, peace giver, and Joy river. He predestined you for Excellence. So, break out of the mold!

Don’t settle for less! Don’t accept excuses to settle where you are, because you are made for more!  “…the path of the righteous is like the light of dawn, that shines more and more until it reaches its full strength and glory.”(Proverbs 4:18). Yes, you can go further than the experts have told you. You can do yourself and your generation a favor by breaking out of that familiar afflictions. You can defile the odd. You are winning! Yes, we are winning!